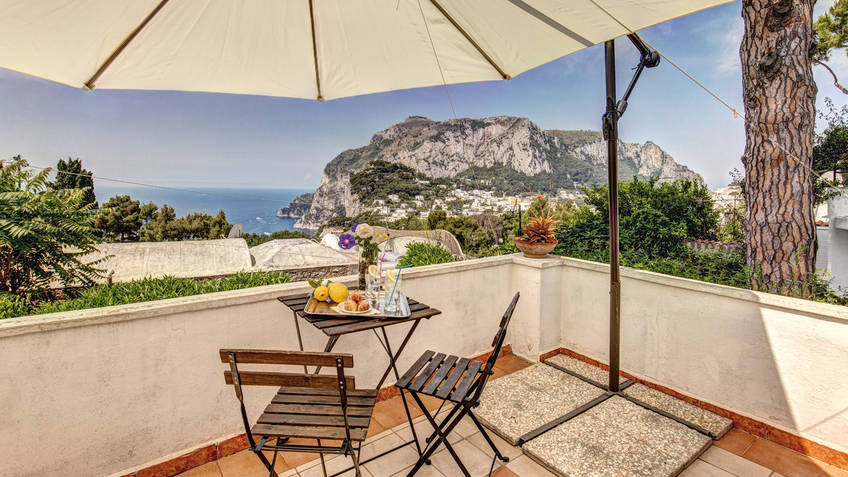 Or request an estimate...
Are you looking for something else, or need an estimate? Request an offer

Or request an estimate...

Once the preferred retreat of painters and poets, now a charming little hotel with breathtaking views of the sea: Capri's La Reginella has been a much-loved hideaway on the island for decades.

It was the violinist Paolo de Falco, together with his wife, Elisabeth Rudorff, who transformed the villa into hotel back in the 1950's and the place has been a favorite amongst artists and independent travelers ever since.

If you're searching for ''simplicity, silence and a spectacular sea view on the island of Capri, you'll love La Reginella: an incredibly affordable and beautifully located 2 star hotel in which you can expect to find all three! Book early if you want to stay in one of La Reginella's much sought-after rooms with private terrace'''.

Start the day with a view of the sea surrounding Capri! On summer mornings, breakfast is served on La Reginella's panoramic terrace.

And the Piazzetta? Capri's famous square is only a few minutes away from La Reginella, as are other major tourist attractions such as the Charterhouse of San Giacomo, the Gardens of Augustus and the Centro Caprese Ignazio Cerio museum.

Want to explore further? From the Piazzetta, you can take a taxi or catch a bus to Anacapri, Marina Grande and Marina Piccola.

What travellers say about La Reginella

"By Capri standards, I'd say it was good quality for money."

"Each room has its own little garden area with table and chairs: the ideal place in which to relax in the evenings. "

"From the terrace of the hotel, a breathtakingly panoramic view can be seen."

"The staff was always pleasant and helpful. "

"The rooms are tastefully furnished, in simple and functional style. "

"The location is excellent for excursions and walks but quite a long way from the center (a 10-15 minute uphill walk). "

"The breakfast was satisfactory although not what I'd call generous. "

"Overall it is a very good place to stay. Alex and Lucia was a wonderful host, who completely take care of their guests . We enjoyed our times there. "

La Reginella: "Dear Donny and Sari, thank you for staying with us, it's been a pleasure to meet you and hopefully see you again sometime in the future. Best regards, Alex"

TripAdvisor Traveler Rating Based on 171 recensioni »

We had an excellent stay in the la Reginella. It couln’t be better. The owner Alex was giving every morning very good service at the breakfast. He gave us a lot of usefull info about the Capri... more »

We had a perfect stay at this hotel in Capri. It is very calm and quiet but not far from Piazetta, restaurants and cafés. Our host Alex was attentive and helped with recommendations as well as... more »

Great views and a super host

I stayed with Alex (the owner) for 2 nights in October and if I am ever back in Capri will definitely stay here again. The room had everything I needed and was very clean. The real selling point... more »

Ten minutes is all it takes to reach Hotel La Reginella from the Piazzetta and the center of Capri The walk might be uphill, but the fabulous views of the sea waiting to be admired from the hotel's terraces make the climb more than worth the effort!

The hotel lies within meters of the Natural Arch', where the spectacular Pizzolungo coastal path, leading to the Tragara viewing point and the Faraglioni rocks, begins.